Send us feedback on this blog topic

Natural gas is made up of carbon and hydrogen and serves a wide variety of residential, commercial, and industrial applications. As an energy source, roughly one quarter of the U.S. relies on this fossil fuel to heat their home, cook their food, and even dry their clothes. The use of natural gas continues to grow in popularity and it is the utility’s job to safely transport and provide this resource both efficiently and economically. It is also their job to look to the future and adjust the process as necessary, which is why hydrogen might be taking an even more active role in the natural gas journey.

Some U.S. gas utilities are toying with the idea of blending the gas with hydrogen, which will significantly lower the greenhouse gases. The current energy crisis in Europe, increasingly heightened by conflict in Ukraine, has pushed this idea to the forefront. In fact, some utilities have already started offering this blended natural gas, especially in urban areas, such as Honolulu, Hawaii. Their manufactured gas continues to be delivered with significant hydrogen blends and is used in heating and lighting applications. 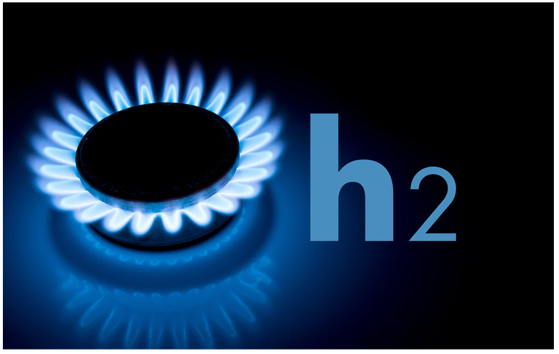 There are different methods used to blend hydrogen with natural gas, which are often described as ‘green’ hydrogen or ‘blue’ hydrogen. Green hydrogen is when the energy used to power electrolysis comes from renewable sources like wind, water, or solar. Blue hydrogen strips hydrogen from methane and attempts to capture most of the carbon dioxide emissions for storage underground. Many are also pursuing chemically identical sources of methane, whether synthetically produced or derived from sources like landfills and pig farms. No matter what blending method is chosen, the goal is the same: create a clean fuel/alternative to traditional natural gas.

As great as the blended hydrogen may sound, a number of factors need to be addressed in order to see long term success with this process. Such obstacles include the extent of the U.S. natural gas pipeline network, the impact on end-use systems, safety, the price to produce and provide the energy, and ensuring the resource is compatible with current household appliances. Porous pipe, fittings, and gaskets may be affected by hydrogen more than natural gas. Hydrogen molecules are smaller than natural gas so measuring this in the customer delivery process creates its own challenges. Some companies and testing organizations have set up mini-satellite systems to see what the short- and long-term effects are on their infrastructures.

As previously stated, hydrogen already makes up a portion of natural gas. However, by blending it with the gas, some utilities may have found a solution to a cleaner, more efficient natural gas alternative. The mid-century goal is a zero emissions economy. The problem is that wind and solar alone cannot do that alone so blending hydrogen with natural gas may be the answer. There are certainly initiatives on the table for carbon-zero by 2050 but the challenges of dollars and time required to incorporate hydrogen into the solution is monumental. As with other industries (i.e., healthcare), Europe has been able to make these changes some years ago and should prove as a model. However, this is easier said than done.

At this point in time, the act of blending hydrogen with natural gas to create a renewable energy source could be the future for the continental U.S. – but there’s a lot more work to be done in order to get there.